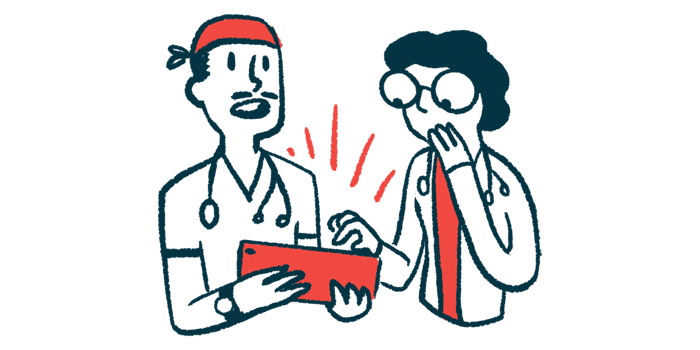 EVER Pharma has launched a mobile app for the D-mine Pump, its portable micro-infusion pump designed to continuously deliver apomorphine under the skin (subcutaneously) to patients with Parkinson’s disease.

“With the development of the Training App for the D-mine Pump in Parkinson’s therapy, we now have an empowering and interactive tool to support the training of the healthcare professionals and caregivers on how to use and program the infusion pump device. The App is an intuitive, easy-to-use simulator and enables training any time everywhere,” Georges Kahwati, general manager at EVER Pharma, said in a press release.

Apomorphine (sold under the brand name Dacepton, Dopaceptin, and Apokyn, among others) is an injectable treatment to help reduce the number of “off episodes,” marked by the reappearance or worsening of symptoms such as tremors and dyskinesia (involuntary movements) in those with advanced Parkinson’s disease. This occurs due to a gradual decline in levodopa’s effectiveness throughout the day.

It has the same effect as dopamine, a naturally occurring chemical messenger (neurotransmitter) in the brain that’s essential for muscle control. The loss of neurons, or nerve cells, that produce dopamine is the hallmark of Parkinson’s disease.

The pump allows for apomorphine to be continuously administered, which may be required for patients who need multiple and frequent injections or those whose disease is not controlled by intermittent injections. Continuous infusion allows for a fast and more efficient delivery and provides consistent control.

According to EVER Pharma, the D-mine pump is safe and easy to handle, a feature particularly important because coordinating movement can be difficult for Parkinson’s patients. It’s built as a compact device with minimal buttons, a simple screen interface and runs on multiple languages.

A full day’s treatment can be set up just once a day. The pump is equipped with an automatic filling without the need for complicated flow rate calculations. This enables patients to use the pump freely during the day without having to adhere to strict timetables in their daily life.

D-mine pump, which is available in several European countries, is part of EVER Pharma’s therapy package for Parkinson’s disease, which includes the D-mine Pen.