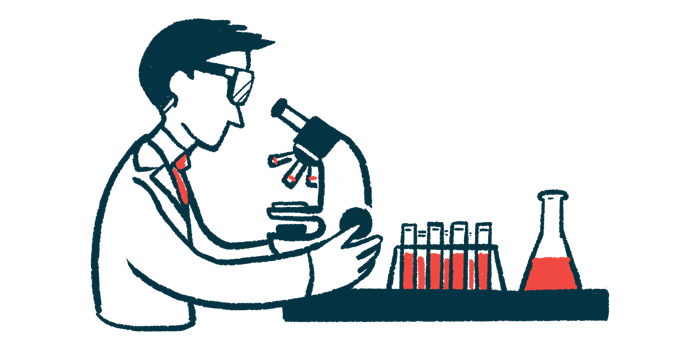 The formation of toxic alpha-synuclein clumps may be the first and critical driver in developing Parkinson’s disease associated with mutations in the SNCA gene, according to a study looking at patient-derived neurons.

While alpha-synuclein aggregation and abnormal calcium flow were detected at the earliest maturation stages of the specific neurons that are progressively lost in Parkinson’s, other types of cellular abnormalities and damage were observed at later stages.

The study, “Protein aggregation and calcium dysregulation are hallmarks of familial Parkinson’s disease in midbrain dopaminergic neurons,” was published in npj Parkinson’s Disease.

Parkinson’s is marked by the progressive loss of dopamine-producing, or dopaminergic, neurons in a specific region in the midbrain. Dopamine is a major brain chemical messenger.

One of the main disease hallmarks is the formation and accumulation of toxic clumps of the alpha-synuclein protein, which is encoded by the SNCA gene. Different types of SNCA mutations have been associated with “the early onset and rapidly progressive form of PD [Parkinson’s disease],” the researchers wrote.

However, there is limited evidence on the temporal sequence of events that lead to neurodegeneration in SNCA-associated Parkinson’s and whether alpha-synuclein aggregation is one of the earliest.

Researchers in the U.K. established that the formation of toxic alpha-synuclein clumps “is one of the earliest critical events driving disease in human neurons, rather than a late-stage hallmark of the disease.”

The researchers used induced pluripotent stem cells (iPSCs) derived from four Parkinson’s patients with disease-causing SNCA mutations and seven healthy people to generate midbrain dopaminergic neurons. iPSCs are generated from fully matured cells, such as those in the skin or blood, and reprogrammed back to a stem cell-like state, where they can give rise to almost every type of human cell.

Two patients (a man and a woman) carried three copies of the SNCA gene and the other two (two women) carried the p.A53T point mutation in that gene. Point mutations result in the change of a single protein building block.

To mature the iPSCs into midbrain dopaminergic neurons, the researchers “tweaked” some previously tested methods. Using a combination of small molecules, they were able to obtain many of these specific neurons.

As expected, the midbrain dopaminergic neurons derived from patients carrying three SNCA copies produced significantly more alpha-synuclein protein compared with those from healthy people and the patients with the point mutation.

Even before acquiring functional neuronal identity, lab-grown neuronal progenitor cells from all the Parkinson’s patients showed significantly higher levels of small toxic alpha-synuclein clumps that were also significantly longer than those from healthy controls. These differences persisted throughout the cells’ maturation process into midbrain dopaminergic neurons.

Similar to alpha-synuclein-related abnormalities, calcium flow was impaired in patient-derived cells relative to healthy controls from the earliest stages of dopaminergic neuron maturation.

Calcium ions can move in and out of neurons through channels and their flow can control the amount of molecular messages sent by the neurons to neighboring cells.

These findings suggest the early formation of toxic alpha-synuclein clumps may damage the cell membrane where calcium channels are located or directly interfere with them, which could impair calcium flow, the researchers noted.

Further analyses on matured midbrain dopaminergic neurons showed that those derived from patients had problems in their mitochondria, the cells’ powerhouses, which resulted in oxidative stress, as well as lysosomal abnormalities. Oxidative stress is a type of cellular damage resulting from an imbalance between the production of potentially harmful oxidant molecules (mainly derived from mitochondrial function) and the cells’ ability to clear them with antioxidants.

Both early and late defects observed in lab-grown patient-derived cells were reversed in cells derived from the same patients but genetically modified to correct their SNCA mutation. This confirmed that the observed abnormalities were due to the disease-causing SNCA mutations and the findings highlighted that the iPSC-derived neurons allowed researchers to zero in on the earliest driver of Parkinson’s.

“The first and critical driver of [disease] was “the development of toxic protein aggregates,” the researchers wrote.