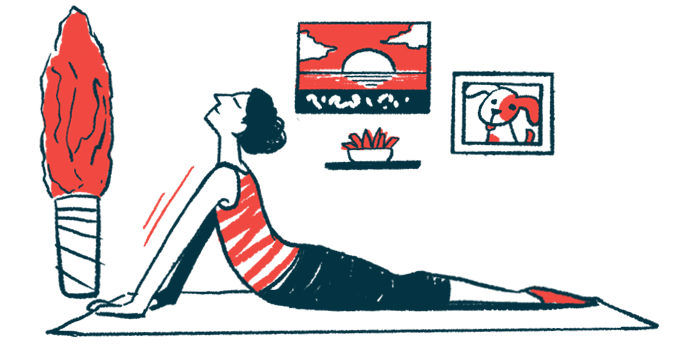 While differences between patients receiving standard care following discharge and those undergoing the nine-month, at-home program generally failed to reach statistical significance, this might be related to the fact that the intervention in the second group occurred during the COVID-19 pandemic, the researchers noted.

Still, most patients were satisfied with the at-home, individualized intervention and felt they benefited from it, including in terms of their disease.

These preliminary findings support further evaluation of the potential benefits of this type of at-home digital intervention in people with Parkinson’s.

The study, “Evaluation of an individualized, tablet-based physiotherapy training programme for patients with Parkinson’s disease: the ParkProTrain study, a quasi-randomised controlled trial,” was published in the journal BMC Neurology.

Increasing evidence supports the benefits of regular physical activity in people with Parkinson’s, who often “live a predominantly sedentary lifestyle and do not get enough exercise,” the researchers wrote.

Physiotherapy, also called physical therapy, is part of the recommended multidisciplinary approach to manage Parkinson’s symptoms. It not only can help build muscle strength, increase mobility, and regain independence in daily tasks, but also reduce the chances of depression and fatigue, thereby improving quality of life.

The Parkinson’s Disease Multimodal Complex Treatment (PD-MCT), established in Germany in 2008, is a mostly inpatient three-week program in which patients receive pharmacological therapy along with physiotherapy, occupational, music, sports, and speech therapy, and neuropsychology.

While this type of program was shown to improve motor function and quality of life in Parkinson’s patients, “there is often a lack of human resources in outpatient settings to continue an interprofessional approach,” the researchers wrote.

Now, a team of researchers in Germany conducted a study called ParkProTrain (DRKS00014952) to evaluate whether an individualized, tablet-based, at-home physiotherapy program after discharge from PD-MCT could help retain the latter’s benefits.

The at-home physiotherapy training program was developed as a tablet-based app to help Parkinson’s patients continue physical activity in their daily lives after discharge from the clinic.

The app contains videos with verbal instructions and explanations for all the physical exercises taught during the PD-MCT that promote endurance, strength, and balance. The app allows the creation of individual training plans.

The study involved 230 Parkinson’s patients: 93 who used the tablet-based physiotherapy program at home for nine months after the PD-MCT (intervention group), and 137 who received usual outpatient treatment after clinic discharge (control group).

Patients in the intervention group were asked to train using the program for up to three times a week, in addition to their usual outpatient therapy. Telephone calls between the patient and the physiotherapist took place every three weeks and training programs were adapted every nine weeks by the physiotherapist based on patients’ needs.

In both groups, assessments were completed before and at the end of the PD-MCT and nine months after discharge.

Notably, follow-up data collection took place from June 2019 to January 2020 for the control group, and from April 2020 to April 2021 — during the COVID-19 pandemic — for the intervention group.

Patients had been living with Parkinson’s symptoms for about nine years. Patients in the intervention group were slightly younger, had completed higher educational levels, were more often employed, and earned significantly more than those in the control group.

Results showed that, in both groups, the inpatient multidisciplinary program resulted in significant improvements in all parameters and that most of these benefits were lost after nine months.

Notably, this deterioration was less pronounced in the intervention group relative to the control group, but these differences failed to reach statistical significance.

The lack of an increase in the frequency of total physical activity in the intervention group also emphasizes the potential effects that the pandemic may have had in standard outpatient therapy of this group, as outpatient services and sports facilities suffered restrictions or closed during the 2020 lockdowns.

Still, the tablet-based approach was associated with a significant slightly positive effect on patients’ social participation and general health compared with before the PD-MCT.

Particularly, the state of health of patients in the control group at nine months had worsened beyond the initial level, while that of those using the at-home approach remained slightly better than before the PD-MCT.

Also, significantly more patients in the intervention group were employed nine months after the inpatient multidisciplinary program (25% vs. 11.8%).

When adjusting for potential influencing factors, the tablet-based intervention appeared to be significantly superior to standard care in improving quality of life, reducing signs of depression, and improving daily life performance.

Among the intervention group, nearly all patients felt moderately or very motivated by the training program to become physically active (90%), were satisfied with the program (98.8%), and felt they benefited from it (94%).

Major cited benefits included learning helpful exercises for use in future self-training and the feeling that regular performance of the exercises had a positive influence on their disease.

Also, “the aspects that contributed most to this satisfaction were telephone calls with the physiotherapist, using the tablet, the individually focused training plans and the training video presentations,” the researchers wrote.

These findings suggest that “despite the impacts of the COVID-19 pandemic on the training program, the stabilization effects of [PD-MCT] can still be detected in the [intervention group],” the team wrote.

“We assume that if the intervention had been implemented under nonpandemic circumstances, the effects would have been much more positive,” they added.

“At the same time, the pandemic and the accompanying contact restrictions make the development and implementation of these kind of remote interventions more urgent,” the researchers concluded.