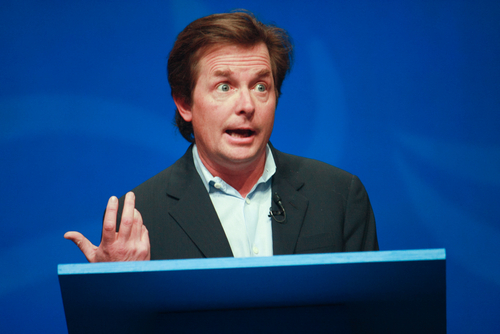 Michael J. Fox is best known for his role as Marty McFly in the “Back to the Future” movies, but many of us still think of him as Alex P. Keaton from the “Family Ties” television series. Far from a wall flower, Fox didn’t try to hide his personal battle with Parkinson’s disease. He came out publicly to spread the word and advocate for the disease. In this Parkinson’s quote, Fox doesn’t blame God for the disease. What it Parkinson’s disease? Parkinson’s is a progressive disease of the nervous system marked by tremor, muscular rigidity, and slow, imprecise movement. I mostly affects middle-aged and elderly people.

Fox has a Goodreads page where he shares many of his notable quotes. As always, Fox tackles touchy subjects by  infusing them with humor. “My notion of spirituality was different than it is now, but even if I’d been the most fundamentalist of believers, I would have assumed that God had better things to do than arbitrarily smite me with shaking palsy.”